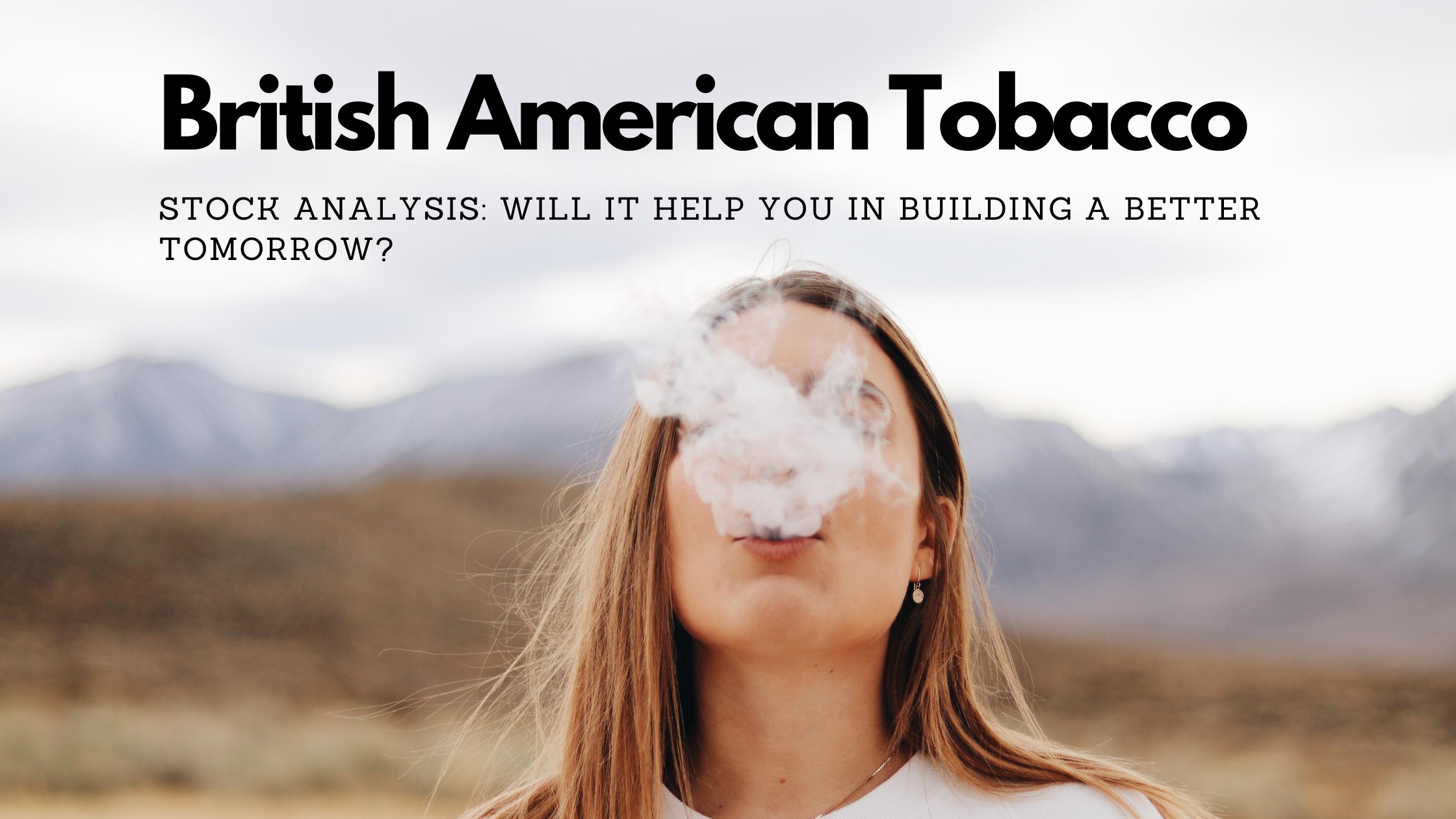 Actually, the company became one of the largest cigarettes producers in the world after its acquisition of Reynolds American back in 2017.

The below picture is an overview of their current brands which exists out of non-Combustible (i.e. vaping) and Combustible (traditional cigarettes) products. I think that some of you might recognize them even when you don’t smoke, i.e. Vype, Camel, Dunhill, Lucky Strike and Pall Mall.

This brand portfolio means that the company owns a wide variety of brands and products which gives them a good diversified portfolio for into the future. And looking at the future: the normal cigarette is not dead yet, but the predictions are that next generation products like vapor and tobacco heating will be the main growth drivers of the industry. The below picture illustrates this 👇

I wanted to also call-out the following text from the research report from Grand View Research:

The global tobacco market size was valued at USD 849.09 billion in 2019 and is expected to grow at a compound annual growth rate (CAGR) of 3.1% from 2020 to 2027. The market is gaining momentum and witnessing a high demand owing to rising consumer disposable income, increasing number of product launches, and availability of superior-quality products. Increasing consumption of tobacco products among females and students is also fueling market growth. According to the American Lung Association, the use of tobacco products has increased from 28.2 percent to 31.2 percent among high school students from 2002 to 2019 in U.S.

I am not too happy though that some of this growth is being based on the increasing popularity of these next generation products among high school students. I’m a non-smoking person and a parent as well and I wouldn’t want my own children to start smoking. But this is where the paradox of investing comes in and especially when investing in sin-stocks, because I’m OK with having sin-stocks in my portfolio.

Let’s get back to the company again. British American Tobacco’s biggest competitors are Altria ($MO), Philip Morris ($PM) and Imperial Brands ($LON:IMB). And the competition is very tough at the moment, because everyone wants a piece of the pie for these new innovative products.

Most recently we’ve seen this with Altria taking a 35% stake for $12.8bn in Juul Labs, which in hindsight was a very dubious investment at a very large price. Especially when the US health department not long after started to forbid the different flavors which made Juul’s products very popular and profitable, especially among teenagers.

At the same time British American Tobacco is suing Philip Morris for patent infringement with their popular iQOS product. This is an important move, because the FDA authorized the marketing of iQOS and its heating system with “reduced exposure” information.

British American Tobacco has to act quick, because it is at risk of losing out on a potentially large share in the US market for its Glo brand. A first-movers advantage will be very beneficial and in this case it might just go to Philip Morris.

In my opinion Philip Morris has a lead time to British American Tobacco by entering the US market for about 1 to 1,5 years. Glo still needs to be submitted for FDA approval.

How do you evolve as a Tobacco company into a company that people start to like and accept again? Well, just listen to all your stakeholders, innovate and add value to their lifes.

The elephant in the room is always the negative health impact from smoking and this is something that British American Tobacco started to embrace and wants to improve on. This is now at the heart of their recently revised strategy:

Having said that, In 2019 British American Tobacco earned in total £25.8 billion in revenue which was 5.7% more than in 2018. These are very high growth numbers for a company which by many is perceived of operating in a declining industry.

Is their dividend safe? That’s the main question that I want to answer as a dividend growth investor when considering to buy BAT shares. Let me therefore explore several determining factors first and then get back to you with my answer.

British American Tobacco has a relatively strong dividend growth track record. It has grown its dividend at least since 2000, hence BAT shares increased their dividend for 20 consecutive years.

I also found their average 10 year growth rate quite reasonable for such a stable company. The average dividend growth ratio was 5.82% which is close to my desired average growth of 6% which I seek for my portfolio.

Their earnings / cash flow have been steadily growing over the last decade. They effectively doubled which according to the rule of 72 means that they grew with ~7% per year over time. I consider this as pretty good numbers.

Just to clarify, the reason for the large spike in EPS in 2017 was due to accounting movements related to the acquisition of Reynolds American in the year and the impact of the US tax reform.

The EPS payout ratio and FCF payout ratio have generally hovered in a band between 55% and 75%. This is in line with their dividend payout policy of 65%.

These EPS / FCF numbers are pure growth numbers without financial engineering, because the company hasn’t been buying back BAT shares except for 750 mln in 2014. It actually issued some shares (~10%) in 2017 to fund the Reynolds American acquisition.

There is some Covid-19 impact though related to the lockdowns and for instance a ban on cigarettes in South Africa. Therefore the company has revised their earnings forecast from a high-single-digit growth into a mid-single-digit growth. I mean, it’s still growth during these extraordinary times!

Long Term debt has declined in 2019 but don’t be fooled by the graph, because current liabilities have been increased at a similar absolute amount. Hence, I consider the amount of debt being relatively flat since 2017.

There are two big spikes in their long-term debt and they are both easily explainable:

Now what does this tell us? Is the company getting in trouble? The EPS / FCF didn’t grow at a similar rate to debt, right?

Well, for that I prefer to look at the development of the debt/equity ratio. British American Tobacco did got assets and equity in return when purchasing Reynolds American.

Having said that, the debt/equity ratio currently stands at 59% which I find a healthy level. The debt to equity ratio stood at 202% in 2016 pre-merger/acquisition.

My conclusion: from a balance sheet point of view the acquisition seems to have been quite prudent.

Now, is the dividend safe?

I believe so. As you saw, the dividend has been growing at similar rates to EPS and FCF. They have not been borrowing money for share buybacks and such, but rather to buy additional assets and a strong position in the US market.

New generation cigarettes are the main catalyst for the whole industry, but British American Tobacco needs to speed up their FDA approval for Glo, because it’s at risk of losing market share in the US.

This risk is the main reason why the share price has been on a downward trend since the FDA announcement on 7 July.

Did this give us as dividend growth investors a buying opportunity?

I am positively surprised about British American Tobacco as a company. I actually didn’t really know the company before and it only caught my attention by being a Noble 30 member.

So let’s do two quick checks via the Dividend Discount Model (DDM) and a Discounted Cash Flow calculation.

Let’s have a look at the dividend discount model. I’m assuming a discount rate of 7.8% for both the DDM and the DCF model.

The BAT share price today stands at 27 British pound, so the gap between Fair Value and the current share price seems to be ludicrous. Hence why I’m always double checking with the Discounted Cash Flow method 👇

Let’s include straightaway some scenario analysis for this one. It allows us to include the risk of British American Tobacco not being able to gain appropriate market share in the US for it’s Glo brand.

This gives us 3 options: either the stock is currently 52% overvalued, around fair value or 33% undervalued. I leave it up to you which scenario to choose.

The company itself seems to be optimistic, because it’s still targeting a mid-single growth for this year and it’s optimistic for the upcoming years.

If they’re right, then today would’ve been a great opportunity to buy BAT shares at 27 pounds and a dividend yield of 7.4%.

I found it very interesting to analyze British American Tobacco. It always feels good to me to discover new stocks which might generate wealth for the next few decades.

Honestly, I’m strongly considering to initiate a position at these prices. I believe that the market is overreacting on the impact that the company might have from the FDA approval for its competitor iQOS ($PM).

I have one issue though. My wife doesn’t allow me to purchase stocks in this company, because in her opinion “tobacco companies don’t add value to society”.

I will try few more times and share her my opinion about sin-stocks. But as we’re in it together, I will respect her opinion which in such case will prevent me from becoming a shareholder in British American Tobacco.

What do you think? Do you own shares in British American Tobacco? Do you find this company interesting?

5 comments on “British American Tobacco – Will it help you in building a better tomorrow?”

An ice cold Pepsi ❄️ is just the best after a

Some of them are facing some headwinds, but the pendulum might just have swung a bit too far to the other side

Some of them are facing some headwinds, but the pendulum might just have swung a bit too far to the other side

@European_DGI In my early months as investor, I invested money that I was not willing to loose because it was part of my emergency fund. And yeah, I needed it during a huge correction. Bad timing, bad choice.
Do. Not. Mess with emergency funds. Never.

This time we shared our investment mistakes🙄.

I think we all make some of them, but as a community we can learn from each other.

Check it out via YouTube or your favourite podcast platform (i.e. Spotify).