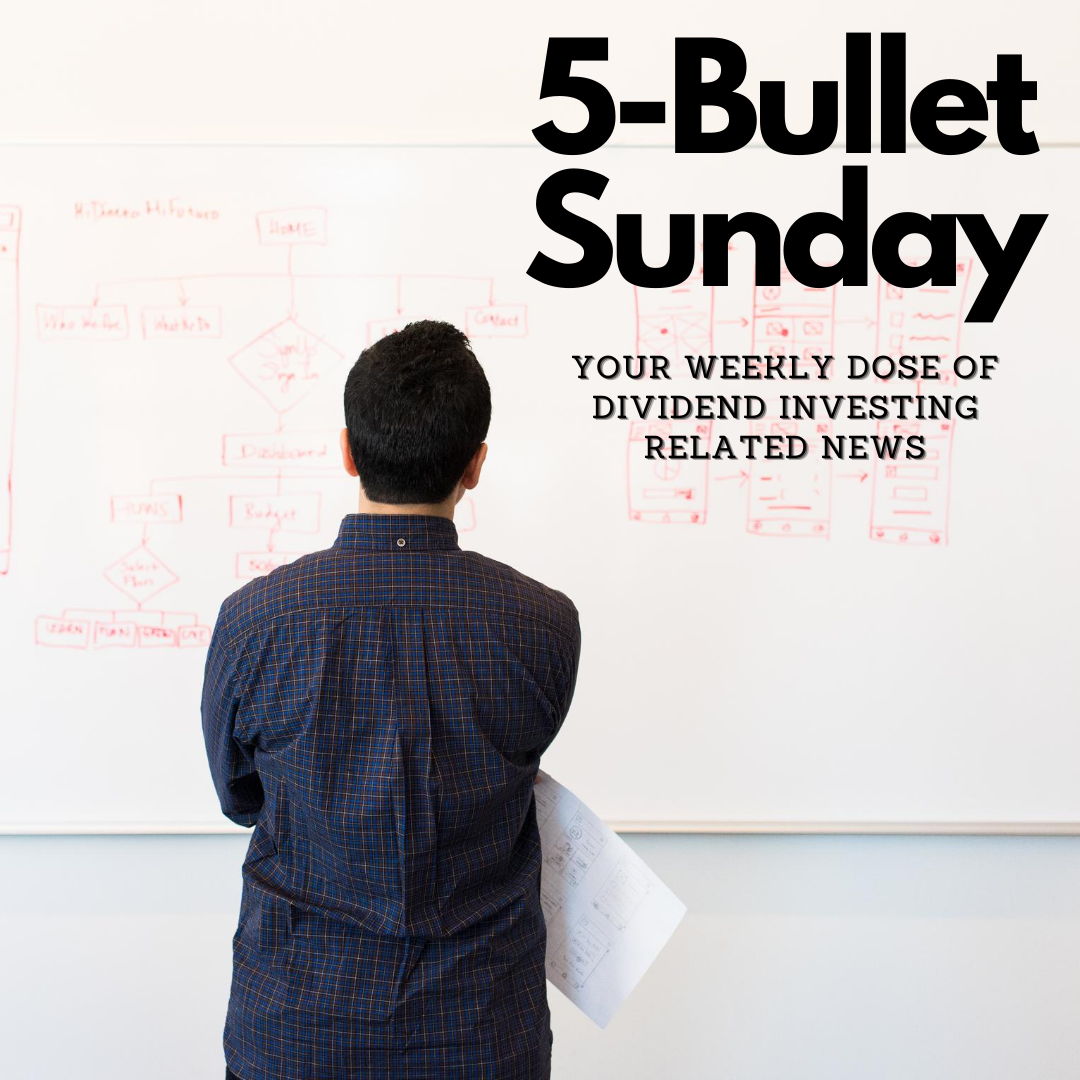 I’m so delighted, because it really feels spring is starting. Yesterday was such a lovely day and for the first time in more than half a year I was experiencing 20 degrees Celsius again!

This is looking really promising, because I started to dislike these long and dark winter holidays. But to be fair, I would lie if Covid-19 didn’t contribute to that feeling.

Anyway, this week was quite a productive week again, because I worked on the following content:

On top of that I have also written a guest post for one of my fellow bloggers. Check out the Recommended Reads section for that one.

Have a coffee and enjoy today’s 5 Bullet Sunday!

Many of us with a value investing mindset are often looking at companies like Intel, IBM and AT&T because of their attractive yield and potential undervaluation.

Who doesn’t love to invest in a company for 80 cents on the dollar?

However, all three companies have some serious issues.

Hence, these companies are trying to turn themselves around right now.

And this is not easy, because sometimes companies just fail and there are ample examples of those, i.e. Nokia and Kodak.

Good examples of successful turnarounds might be a bit harder to find.

However, in my opinion Microsoft is a great example of a successful turnaround. The company really found its mojo back after the appointment of Satya Nadella.

It transformed itself from a legacy Windows & Office business into a Cloud powerhouse.

So the question I want to briefly address then: how can we spot whether a company is doing a great turnaround?

It’s always easy to evaluate it afterwards, but from an investing point of view we would want to be able to do that right now.

The good thing is that there are some frameworks out there and I like in particular the 7 elements by Chad Rapsey. These 7 elements touch on different expects that are all crucial when trying to turn the company around.

So what I have done as an exercise is to list these seven elements in the table below and evaluate Intel, IBM and AT&T for each of them.

Have a look below.

I believe that these 7 elements are speaking for themselves and require no further explanation. The scores applied are based on my own opinion and can be considered a bit arbitrary.

I follow all these 3 companies with quite some interest, so I also believe that I have some view on what’s going on there.

But as an example, I have given AT&T a + for financial restructuring, because they have decided to sell DirectTV at a big loss using a sunk cost philosophy and they have been refinancing their debt quite aggressively. They didn’t deserve a ++ because although they claimed to have reduced their debt, it wasn’t really visible in their numbers.

When finally looking at the outcomes, I think that Intel is best positioned to make a successful turnaround closely followed by AT&T.

Unfortunately I don’t have too much faith in IBM and therefore I’m staying far away from it.

Philips has decided to sell its Domestic Appliances business to global investment firm Hillhouse Capital for a 4.4 Billion deal.

This deal seems similarly structured as when it sold it TV business a decade ago, because a part of the deal is based on a licensing agreement.

Hillhouse Capital can keep using the Philips brand for another 15 year. This is good news, because it means that we are still able to buy our next tooth brushes and espresso machines from Philips.

The CEO of Philips mentioned that this concluded the last of their divestments:

“This transaction concludes our major divestments. Going forward, our focus is on extending our leadership in health technology and continuing our transformation into a solutions company supporting professional healthcare customers achieve the Quadruple Aim and consumers with their personal health.”

We can now finally say goodbye to our father’s Philips, because it really doesn’t exist anymore.

I personally applaud this deal and I’m becoming more and more bullish on the company. If they want, they could reduce the long-term debt by almost 50% from this single sale.

It’s just a pity that Philips didn’t increase it’s dividend this year and that the shares are a bit too pricy for me.

🌟 Exposure to China is a risk

The political language between Europe and the US on one side and China on the other side has been escalating quickly over the last few weeks.

This puts international companies with a strong presence in China also in the spotlights, because they are put under pressure to take a position on the human rights issues.

As we have seen with Nike last week, because they are facing a backlash after they expressed concern about the alleged use of Uighur forced labour in cotton production.

The interesting thing is that Nike made these comments already last year, but they only now got under the spotlight after few social media icons from China called them out on it. Off course, they are considering the observations from Nike as “fake news”. Where have we heard that before? 😅

But it’s not limited to Nike anymore, because this week the other big European fashion brands Adidas, H&M and Inditex have also joined the club. They are now also being called out on Chinese social media so this means that the party has really started.

Share price wise those stocks have declined approximately 5% after the news and rightly so.

These companies are counting a lot on Chinese expansion as a next leg of growth over the next decade. Without such growth those companies would lose one of their biggest catalysts and it wouldn’t justify their multiples anymore.

Werther this Chinese social media decline will really leads to lower sales has to be seen and I hope to find some clues on that in the upcoming Q1 reports.

But you know, sometimes bad press is also good press when it comes to increasing brand awareness.

What’s my personal take-away from this?

I strongly believe that it’s really hard to do business in China when you rely as a company on your Western values and believe systems.

That’s why I consider a business that relies a lot on China for future expansion and earnings growth as an additional risk. Such risks need to be discounted into the price when we are investing in those companies.

As an example, I own a very small position in $BABA and it is a no-brainer that this company is undervalued compared to its peers when solely looking at their numbers.

But from the other side, there is a lot of political risk involved with holding their shares, hence why it probably deserves to trade at lower multiples compared to their western peers (i.e. Amazon, Google and Facebook).

Wolf of Harcourt Street wrote a good article about when to sell a stock. I’m very glad with his article, because it helps me build my understanding and approach a bit further. It’s just one of those topics that I find hard to grasp as a long term investor and that’s why not that long ago I reached out to him. Why not try to learn these kind of topics from a growth investor?

Dividend Growth Investor wrote a nice article about Nestle. As you know, Nestle is the company with the longest streak of sustained dividends that have been growing over time. Hence, this company always deserves some extra attention to me. Check it out here.

Last but not least, I wrote a guest post for my buddy Jung in Rente. It is an article about 4 European Dividend Stocks that I currently find attractively valued. Check it out and let me know what you think 👍

Today I would like to ask you for some feedback.

Since the beginning of the year I have been thinking of turning the 5-bullet Sunday series into a weekly YouTube video series.

The reason for that is 3-fold:

To be clear, having this Sunday routine is really important to me, because being consistent is what allowed me to get this far already.

Secondly it really helps me by writing down my weekly thoughts and reflecting on them, because I truly think it makes me a better investor.

Hence, no worries, I’m not intending at all to stop writing these Sunday updates.

However, today I would love to hear your feedback on whether you could do with the video as well instead of this piece in written form.

Let me know your thoughts 🙏

That’s it again for the week. I hope you enjoyed this week’s 5-Bullet Sunday 👌

If is easy for you, go ahead. For the public can also be good, since we can list while doing other things.

And worst-case scenario, you try it for a quarter. If does not goes as planned, you can come back to the old scenario.

Have a nice week. Cheers!

Thanks, I’m leaning towards that indeed. It’s easier for me I think and I like your suggestion to try it out for a quarter. That gives me 12 attempts to try it out 👍

Personally, I like the way it is now, because the posts allow me to quickly scroll through and find what is interesting for me but I understand that videos might bring benefits like better info graphics. In that case, you may consider annotated videos and split them to chapters thus giving an option of quickly navigating around.

Good point and thank you for sharing that. I think i’m leaning towards trying it out for a quarter or so to see how it goes. I included chapters in the description of the video to allow people to navigate to the right “bullet”. Is that what you are referring to?

Yes, that’s what I meant.

Thanks for the comparison. Haf IBM on the watch list, but look like a bad buy for now. Already into INTC and T, looks like made the righr choice. Also betting for turnaround for KHC, BP and RDSA.