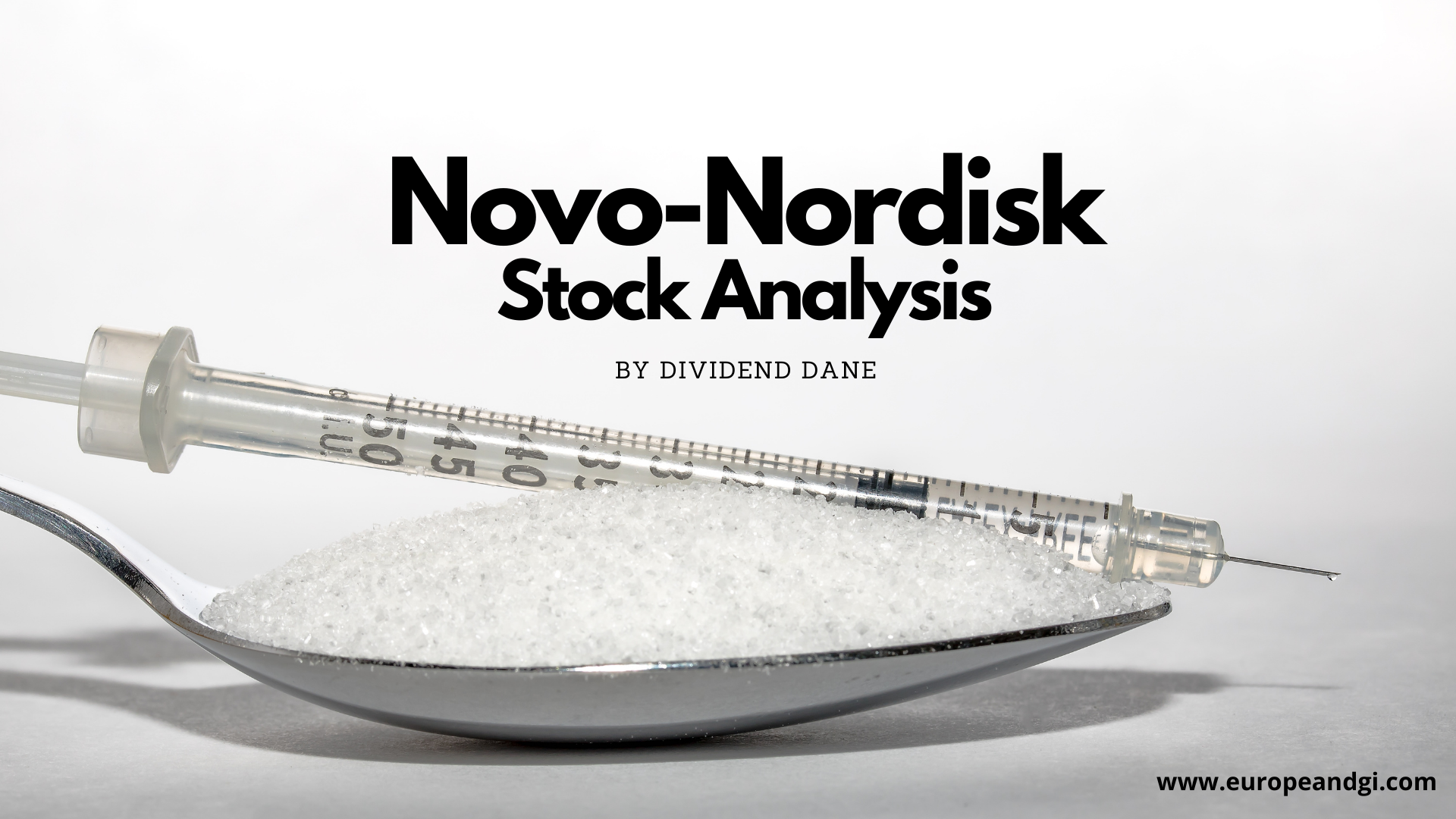 The European Dividend Investor community is truly almost as rich as European history in itself. Collectively we know so much about the companies that we’ve grown up with in our own countries. This actually means that it would be a pity if we don’t leverage the full potential of this community by sharing our knowledge with each other.

For this reason I’m actually very pleased to share this platform today and give Dividend Dane an opportunity to share his Novo Nordisk stock analysis.

Dividend Dane is a very engaged person both on this blog and on Twitter. I’ve got to know him as a very smart guy who truly knows his facts. He reads a lot and looks far beyond the headlines to understand the ins and outs of a company better. Hence I know that I can always count on him when he shares his knowledge.

At the same time he is a very humble and friendly person who is very passionate about dividend investing.

And as his name suggests: he is from Denmark. Hence, I honestly wouldn’t know any better person in the world to give us some insight into Novo-Nordisk, a Noble 30 member and a cultural landmark in Denmark’s business heritage.

Dividend Dane, the floor is yours 💪

I guess that a quick introduction is probably appropriate. I’m honored that European DGI asked me if I would do a guest blog for him. I’m Dividend Dane and like European DGI I also focus mainly on dividend stocks for my portfolio. I don’t have a blog, a podcast or a YouTube channel, but I’m pretty active Twitter, so you can catch me there.

Novo Nordisk is the largest company in Denmark, with a market cap of approximately 150 billion US$. It is the leading supplier of insulin and diabetes related medicine in the world.

August Krogh, a professor at the University of Copenhagen is one of the main founders of Novo-Nordisk. He was pretty well known at the time, because he won the Nobel Prize in 1920 in Physiology or Medicine for the discovery of the mechanism of regulation of the capillaries in skeletal muscle.

As a result of that he went on a lecture tour through the east coast of the United States. He was not alone, because his wife, Marie Krogh, herself a diabetic as well as a medical doctor, persuaded her husband to take a detour to Toronto, Canada. She urged him to visit the scientists Frederick Banting, Charles Best and John Macleod so that he could  get permission to manufacture insulin in the Nordic countries.

Upon arriving back home, the couple started the company Nordisk Insulinlaboratorium (it later became Nordisk Gentofte) with another doctor, Hans Christian Hagedorn and pharmacist August Kongsted.

Thorvald Petersen and Hans Christian Hagedorn did not get along well, so a year later Hagedorn fired Thorvald Petersen, and his brother quit his job out of loyalty. The brothers went solo and established their own insulin company: Novo Terapeutisk Laboratorium (later Novo Industri).

The die was cast for decades of rivalry between two companies, two images and two cultures, but both with the same overall objective: to develop and manufacture world-class diabetes medicine.

Fast forward to 1974 and Novo Industri A/S was listed on the Copenhagen Stock Exchange. The Novo Foundation that had been established in 1951, retained a controlling interest in accordance with the Articles of Association and the owners’ wishes.

Their competitor Nordisk Insulinlaboratorium followed a different path as the management reorganized it into three divisions:

So essentially there were two pharmaceutical companies, large by Danish standards but small in global terms. They operated within a few kilometers of each other and both were manufacturing insulin as their core business. Both companies pursued the same markets, the same researchers and the same scientific personnel.

For many years there was talk of a possible merger in the circles around the two companies and their respective foundations. But it never seemed to amount to anything. The historical, cultural and personal barriers were just too big.

When Harald Pedersen and his brother had left Nordisk Insulinlaboratorium in 1924, he had the following exchange with August Krogh:

Those voices of the past and the fierce competition between the two companies over the past decades had not been forgotten and had stood in the way of any real merger talks.

Nevertheless, in January 1989, the boards of the two foundations with corporate interests, Novo Foundation and Nordisk Insulinlaboratorium, issued a press release that was something of a bombshell in danish media.

The press release was short and precise: “The Boards of the Novo Foundation and Nordisk Insulinlaboratorium have agreed to merge the two foundations into the Novo Nordisk Foundation”.

It was the largest merger in Denmark’s corporate history. The Novo Nordisk foundation then split up the business in 1999/2000, one for health care retaining the Novo Nordisk name, the other for the enzyme business called Novozymes (market cap of approximately 110 billion $ according to Bloomberg.com).

There has also been a spinoff with the IT company, NNIT (market cap of approximately 2,7 billion $ according to Bloomberg.com). NNIT is also listed on the Danish stock exchange. Last but not least, the spin-off of a pharmaceutical engineering company called NNE which isn’t listed on the stock exchange.

Novo Nordisk is primarily known for its insulin and products for Type-1 and Type-2 diabetes. However, they also produce solutions against growth disorders (growth hormones), obesity and hemophilia.

We can break down their revenue as the following according to their latest reports:

In accordance with the Foundation’s Articles of Association, the Foundation is obligated to maintain a controlling interest in Novo Nordisk, as well as Novozymes. That is done through Novo Holding and two classes of shares A shares and B shares.

The A shares are not traded publicly and have 10X the voting rights of B shares. B shares are traded on the stock exchange.

All in all, we can consider this a decent Q3 which was in line with expectations.

We actually can get a firmer idea of the direction of the company when looking at the numbers in a larger perspective than the just the recent financial quarter,.

As dividend investors, this is something that is of specific interest to us. Like most Scandinavian companies, Novo Nordisk has a pragmatic approach to their shareholder returns. No dividend is carved in stone, but rather something that the board decides on each year and reflects how the business is doing financially.

Hence, you won’t see Novo Nordisk paying out lavish dividends if the company should somehow find itself in financial difficulties. This is a different approach compared to some US oil companies that loan money to pay their dividends in order to maintain their status as a Dividend Aristocrat.

The guiding principle is that any excess capital, after the funding of organic growth opportunities and potential acquisitions, should be returned to investors. The company applies a pharmaceutical industry payout ratio to dividend payments, which are complemented by share repurchase programs.

According to the financial statement the payout rate was rather conservative at 50,5%. This was a dividend increase of 2.45% compared to the dividend from 2019 (8.,15 Dkr.).

On top of the dividend, the company runs a share repurchase program of up to 17 billion Dkr. this year. Please note that the amount might be reduced in case of any acquisition opportunities.

This is where it gets interesting. Income statements and balance sheets are only part of the story. To me, growth is really the most interesting part, so let’s get into that.

The number of people affected by diabetes is expected to increase by 51% from 2019 to 2045 according to the International Diabetes Federation diabetes Atlas – 9th Edition 2019.

This is of course a major driver of growth for a company with the largest market share in the segment. Besides that, CEO Paul Hudson from Sanofi (competitor) has clearly indicated that the company is shifting away from the Insulin/Diabetes segment to focus on cancer and immunology. This should also contribute to further growth.

Another potential growth driver is the obesity segment and Novo-Nordisk has some very promising developments in the R&D pipeline. The company has informed the US FDA that they will be using a previously purchased “Priority Review Voucher” for their oral Semaglutide product against medical obesity.

The results in phase 3 have been encouraging so far with weight losses of 17,4% according to an interview from Chief Scientific Officer and Executive R&D Vice President Mads Krogsgaard Thomsen with Danish finance media “Finans” back in May.

With the Priority Review Voucher, a final approval could be a reality in late 2021 or early 2022. Currently it is estimated that there are about 650 million obese people in the world and only 2% of them receive medical treatment. The potential for an effective obesity drug should be obvious to everyone.

The current share price is 410 Dkr while writing this article. This means that the stock trades at a 24 P/E multiple.

I’m using a simple discounted cash flow model with three different growth scenarios to come to my fair value estimate (Low (5%), Medium (7%) and High (9%)). Based on that, I’m getting the following results on fair value:

I leave it up to you to decide which growth scenario you find realistic based on my analysis. Like most stocks, whether the stocks is overvalued or undervalued, depends really on your future growth expectations for the company.

I hope you learned something about Novo Nordisk and enjoyed reading this blogpost.

Also let me know if you’d like to see more of these kind of guest posts or if you’re interested to write a post one time yourself.

I’m trying to build a community here that lasts, hence I’m very open to such suggestions 👌

Nice article. I believe that diabetes and cholesterol, unfortunately, are one of the mega trends for the next years to come. I plan on building a small basket of related stocks. Novo is definitely on the list, with Medtronic, Abbot, AstraZ, and Dexcom just to give it some excitement

Hey, I’m a French investor and it’s a very nice article ! I bought Novo Nordisk this month in my portfolio :). I’ll probably add Sanofi and Philips to have some strong company in Health sector ! Is it possible to have the formula you used for the faire price ? I would like to use it 🙂